Who would win? Mahmoud Ahmadinejad or George Bush @ debate!

Forum for anything else which doesn't fit in the above forums. Site feedback, random talk, whatever, are welcome.
Locked
16 posts • Page 1 of 1

Who would win? Mahmoud Ahmadinejad or George Bush @ debate!

Mahmoud Ahmadinejad accused the US and UK of abusing their "special privileges" and said a debate would let both sides air their views uncensored.

The White House called his suggestion a "diversion" from global concerns over Iran's nuclear programme.

Mr Ahmadinejad was speaking two days before a UN deadline for Iran to halt work on its nuclear programme.

He said Tehran had proposed a framework for further talks but said no-one could stop Iran having a peaceful programme.

"Peaceful nuclear energy is the right of the Iranian nation," he told a news conference.

"The Iranian nation has chosen that [course] based upon international regulations, it wants to use it and no-one can stop it."

He said Iran's response to an incentives package, offered by six nations in exchange for a halt to its nuclear programme, was an "exceptional opportunity" to resolve the dispute.

When asked if Iran would halt enrichment, he said any kind of dialogue "should be based upon the certain rights of the Iranian nation".

"I suggest holding a live TV debate with Mr George W Bush to talk about world affairs and the ways to solve those issues," Mr Ahmadinejad told reporters.

Iran and many other nations "are against America's practices in managing the world", he said, calling such practices unjust.

He accused both the US and UK of taking advantage of their "special privileges", saying he thought they were the "the origin of all disturbances in the world".

And he also questioned their right to a veto in the UN Security Council. "Isn't it time that international relations are founded on democracy and equal rights of the nations?" he went on.

But he did not rule out talks with the US in future, if certain conditions were met.

Mr Ahmadinejad's challenge to President Bush was dismissed by the White House.

"Talk of a debate is just a diversion from the legitimate concerns that the international community, not just the US, has about Iran's behaviour," White House spokeswoman Dana Perino was quoted by Reuters news agency as saying.

Iran has been given until 31 August to halt uranium enrichment - a possible route to nuclear weapons.

Earlier this week, Tehran had offered "serious talks" in response to a package of incentives put forward by the five permanent UN Security Council members and Germany.

Washington has proposed implementing sanctions if Iran fails to meet the deadline, while Russia has said such a move would be premature.

Mr Ahmadinejad said it was "unlikely" the Security Council would take action against Iran, and said "sanctions are not an issue".

"We have said everything in our response. I think the time to use the instrument of the Security Council has expired," he said. 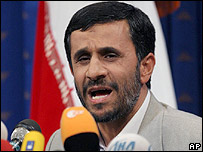 
Who do you think would win the debate? George Bush or Iranian leader Mahmoud Ahmadinejad? Please vote and explain your answer.

I personally think that Mahmoud Ahmadinejad would win because he does bring up valid points with peaceful nuclear power. I think george bush would get wooped.

Ok the last one went nowhere and so will this one...

the last one was by my cousin and i didnt know he had my pssword. this one is by me and is not about george bush being bisexual. This is about a political debate that may occur and could go very far. you know politics

An Iranian friend of mine and I both thought such a debate would have been hilarious to watch. Oh well, too bad it had no chance of actually happening.
Get up to $200 off on hosting from the same people who host this website!
http://www.ryanvm.net/forum/viewtopic.php?t=2357
Top

The real question is who is the biggest threat to modern civilization among these two fools.
Top

All the the world needs........another nation with nuclear capabilities........especially in the middle east where neighboring countries just love each other to bits.....and pieces.
Top

Some of you may have seen this already.

yeah, a good one

Why this thread is not marked as SPAM

Heh, shrub can't even compose a rational sentence without a script from his speech writers, so there's no question who would win this debate.

Ahmadinejad wants to wipe out Israel? Not that I'm a big fan of Bush or Israel, but need to say more? Further on it's not just Bush who is against Iran having nuclear powers, it's the entire NATO, UN and EU... So what is exactly your point The Creator? And why place a 'normal' picture of that Iranian guy and a retarded pic of Bush? I thought you wanted to have an objective discussion.
Top

They're both douche bags.
Top

OK, I'm locking this before it spirals out of control.