This is a very useful screencapture utility which I install on all the computers I build for newbies now, so that the peeps can use it to copy errors to email me if they are having problems. It will not only take a screenshot of the error message but in most cases it can copy the actual text of those windows to the clipboard! Pretty nifty huh?

Copy Message Box
Features:
* CopyMsgBox Text allows you to easily copy texts or screenshots of message boxes and dialogs into the clipboard.
* Useful for documentation/bug reports etc: Instead of copying a messagebox's (or any dialog's) text by hand, simply strike a key (configurable to your choice) - and the text is copied to the clipboard.
* The "Paste" command of your editor inserts the message to your document! 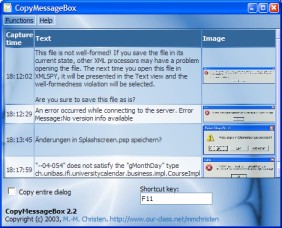 Not a single reply to this ever???

Even tho this is likely one of the MOST useful utilities you can ever install on a newbies computer that you are giving tech support to, cos it makes it easy for them to copy their error message over to you???

Wow! The apathy of the leechers around here is monumental. This is now on my "Cull Alert" list. Seven days to let me know you use it or you LOSE it....

The link works EXACTLY as it is intended to and if you bothered to read the damned page you would know WHY and have responded accordingly in this thread.

Looks interesting. I haven't used this before but would love to give it a try. As I've said in other threads, I am a faithful user of your other addons (my favorite being your expertly customized XnView). Hopefully you'll decide to share this one. Keep up the good work.
Top

proximous wrote: Hopefully you'll decide to share this one. Keep up the good work.

Check the timestamp of my original release which says: Wed Mar 08, 2006

I didn't have a single iota of interest in this from ANYBODY until I nuked it a few weeks ago for inactivity - despite my very public warnings that I was about to cull my inactive releases - and I think 18 months was more than enough time for users to make an effort to contribute some feedback.

However, today I decided to re-evaluate my Nuked Addons and give them a reprieve if at least FIVE users will come forward to say they are benefiting from that release. I don't think it is worth my time and effort to support an addon unless there is at least five people who are known to be using it, and I think you would have to agree that is a fair enough minimum requirement on my part.

Whether or not I RE-share this file is not a "decision" it is a "dependency" - all it takes is FIVE people who have been using this during the last 18 months to come forward and prove to me that it was worth my time and effort to maintain and then the download link to the updated installer will be restored.

And in case you are wondering, iuli_kyle's feeble reply above does NOT count as the 1st of five because it was a whine and not a request, and neither does yours because it didn't meet the conditions cited on my notification page either.

If this hard-line stance is what it takes to housetrain the lurking leechers into growing a set of manners and stop regarding me as a "service provider", then so be it.

i think i would benefit from this release.
Top

heres one vote/person of the five needed

I would be three on the list.
RickMcKC
Top

And also would like it. This will make me the 4th ?

Well actually no, it does NOT.

I might possibly count TechnoHunter's reply as one vote from a user, cos at least he has stated that he uses the utility (if not the actual addon)

My requirement is to hear from the 2000+ users who have ALREADY downloaded this (and probably been using it) over the last eighteen months since I first posted it - it was not an invitation to voyeurs, opportunists and curious collectors.

And, as it seems that you have totally missed my point, even if you did count as a person who had "already been using this" in the past, then your reply would still have been invalid, because if you would actually READ the "Link Suspended" page it says this:

If you want me to resume the maintenance of this pack and make it available for public download again, then you better advise me that you have been using it and make a respectful argument for why I should continue to support you for FREE when you were too apathetic to support me in return.

The download link will not be reinstated again until five users of this addon have responded to the release post at RyanVM Forums. If I can't find at least five people who were using this, then it wasn't worth my time sharing it anyway.

And I am the only person here who happens to notice that NOT ONE of my respondents in this post so far have actually delivered their reply as a REQUEST?

Didn't any of you have mothers that taught you a set of basic manners?

... although I do suppose that, technically, I and some of the others who have commented on our "desire" to give this addon a try might be considered "voyeurs, opportunists and curious collectors" - a very colorful description, I might add.

Anyway, I'll eat the humble pie for the rest of us. Would you please, Mrs. Peel, make this available to the four of us who have expressed interest?

I know how hard is to make an addon (i tried in the past, but no success), but more harder is to keep it alive. Yeah, i know that, because i run my own site and damn leechers won't move a thinger for community's best. I understand you perfectly, so, i hope you'll understand me also and sorry if i created any dislikes.

i appreciate your hard work please continue Thank You
Top

Hey! Brand new user here just to request a repost for this! Thanks!
Top

Thanks, didn't know about this util. Going to use it (but I simply install it via runonceex@t13).
Top

has someone got a working link to this Addon please?
thank you
Top
Post Reply
17 posts • Page 1 of 1