This is a bundle of CD-DVD support files and tools that I made for my next ISO build, which has uses the older ASPI Layer v4.60.1021 (that is known to be more reliable than the latest v4.71.2 for many of the kinds of open source DVD utilities I use and release here).

I've also included my trusty CD-Recordable FAQ by Andy McFadden, cos it's the best reference guide I've found on this stuff ever, constantly updated by the author over many years and useful to have on hand in a hurry in case you ever need it (which is usually when you are in a hurry hehe).

I owe a very HUGE thanks to n7Epsilon for helping me with this and showing me some really nifty tricks, including how to use the DelService INF directive (which I didn't even know existed until this week DUH). He saved me a heap of grief and a pile of unnecessary reg entries as well.

Please note that this is written for an UNATTENDED install and it is NOT for the purpose of downgrading your existing v4.7x drivers in a current (live) install, although I DID include the *.bat files from ForceASPI in the program files folder just to keep the package complete.

Also note that it requires a reboot on both install and uninstall to add/del the service and you will not get prompted to do that. Also note that I have coded a 2nd uninstaller prompt to give you the option of keeping (or not) the ASPI v4.60 system files.

I may consider (in future when I am less busy) doing a pure ASPI v4.60 pack, but in the meantime this is what I needed right now for my own immediate use.

Only tested on Win2k3 and it's all working AOK for me here, but I would appreciate some feedback from users of other windoze platforms.

ForceASPI v1.7
Why use ForceASPI for Adaptec ASPI Layer v4.60.1021?
Many people report that this version of ASPI layer drivers offers the BEST COMPATIBILITY with the greatest number of software programs, regardless of which Windows operating system they are used with. This nearly universal compatibility is what makes ForceASPI so attractive.

ForceASPI scripts allow you to install Adaptec ASPI layer v4.60 (1021) on your PC regardless of your hardware or software configuration. The reasons ForceASPI was created, and why you might want to use it: 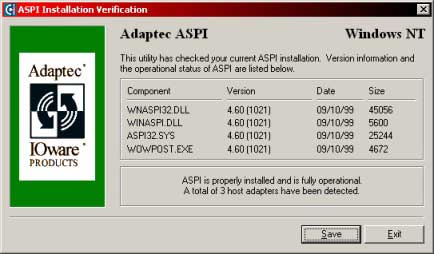 Thanks Mrs Peel. I usually added aspi after my install disc..gets to a pain the butt when ya forget and cant figure out why something doesnt burn or rip right and then pull the homer simpson..DOH!
Top

Thanks to n7Epsilon, I have learned there is a much better way to install the system driver for this, so updated accordingly.....

PS: Previous will still work AOK too, but yanno how fussy I get about my INFs hehehe.....

It might be me, as I alway screw things up; but I am having troubles DL'ing

Greetings Mrs Peel! I am thoroughly exited to be able to include some (heck or ALL!) of you adddon packs that are now available; as last install, which I screwed up and integrated SP-3 RC without knowing that it was not going to be hotfixed, or patched I got stuck with it, as well you were updating everything at that time, and nothing was available.

Now that I have the real deal; meaning SP-3 actual release, I am ready for the daunting task of a month long deployment here on the studio's server.

I want to thank you in advance for anything I can use here, as there is quite a collection, and one could hardly want for more. My problem lies in that of all things, I particularly need this addon, as I am having troubles with an old SCSI card made by Adaptec, and it relies on ASPI drivers, that I just plain cannot get the new garbage to work however hard I try!

I keep checking back and trying to download this pack, and I cannot; I am receiving the standard Winbloz IE "The webpage cannot be found" error...

I am going to move on and see if any of your other addons behave the same way, and will know soon, as I am wanting to try a whole plethora of them! Rest assured, I will be sending my thanks for such things, and I indeed thank you in advance. If anyone out there can confirm or deny if there is an issue with the link to this pack, I sure would appreciate it, as I am pretty certain, this is all that will get my old Adaptec AVA-2906 and SONY SDT-9000 DDS tape drive up and running on the new install...

Many thanks!
Douglas
Top

Thanks for the reply, "roirraW "edor"

It looks like I am totally screwed then... I hope she does come back around, and ever thing is OK; she certainly is the resource around here...

You're welcome and sorry for the bad news. What about her links (in the first post) to the sources of the files she used? Will they help you?
Top

The only thing that has not been run or investigated along with about a thousand other third party things is the Force ASPI v1.7. Perhaps I should investigate that.

That sure is a bummer about Mrs. Peel, as the last install I did and blundered, she was reorganizing and updating, so I have not yet been able to use or try a single thing she has out there. It is too bad that she is having troubles whatever they may be, and it is also a shame that they are not on the server that is offered here for just that sort of stuff. I suppose after one reads her disclaimer(ssssssss) that she has her reasons for keeping the stuff under lock and key. Though in the spirit of open source, and GNU that she says she values and entertains, that seems a conflict in my book, as anything I have ever released under GNU has been openly distributed; I was always taught years ago that was the whole point of it all; but perhaps I missed the point. After all, I have only been doing this going on 30+ years now, and if I were not trying to make ends meet in another business, I would be doing more coding and such, and most probably giving the majority of it out under GNU/Open Source type licesing... Who knows; I can only say I hope for her, not me that everything gets sorted out.

I merely have not the time to waste coding a bunch of stuff and dicking around, as that is not what I am trying to do these days... Maybe in my "free-time"... Yeah, what free time???

Thanks for all your help kind Sir!

i have that link saved for special occasions such as this

LOL! Maybe assign it to a hotkey!?
Top

If she (Mrs. Peel) did not trash my PM's without reading them, I did use your link to see her situation, and believe me, I surely can identify with what she is dealing with, as my deal is not a whole lot better; perhaps worse...

I hope I am forgiven, but if not that is how it goes, and I suppose I will just have to "let my fingers do the coding" so to speak, and she can just keep her wonderful addons to herself. I hope there is no love lost, as I was oblivious to the situation...

I guess if I am not forgiven, I can just add her to the ever growing list of people that I have pissed off, on, or just have freaked out on me. That is life. And in the words of my good old grandfather, "Who ever told you life was fair?!!!"

Thanks all for straightening me out on this, and I suppose I will crawl back under a rock somewhere now...

Best regards, and if you are "listening" Mrs. Peel, I was serious about what I mentioned in my apology; I think you know for what I speak...

Thank you all in the community here! Very good medium you have going for you!
dwire
Top
Post Reply
12 posts • Page 1 of 1